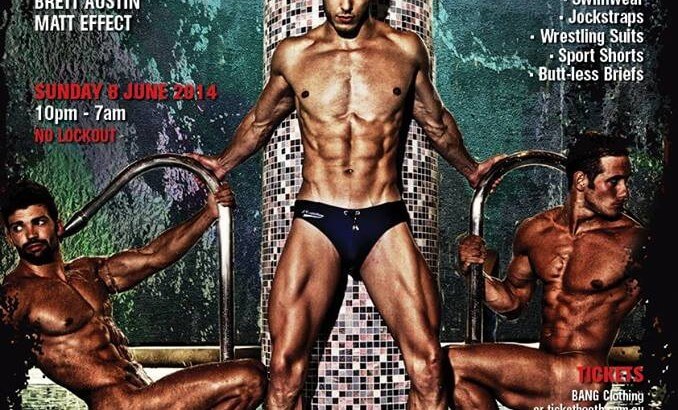 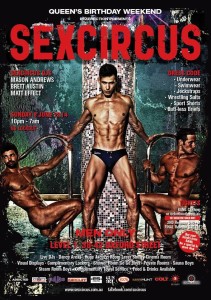 After the massive and sexy success of RezErection: Boot Camp and Combat after party at Sydney Sauna (both of which caught many soldiers by surprise), we are thrilled to announce SEXCIRCUS on the Queen’s Birthday long weekend in June!

On Sunday night 8 June from 10pm, Sydney Sauna will be transformed and totally over the Big Top as a playground for high performing circus “animals” and artists that are let loose on the hunt for one night only.

With NO LOCKOUT in place, the craziest party-cum-show in town is in a stunning new venue and will feature all the bells and whistles including a huge Jacuzzi Room laser show, cinema room antics and saucy visual displays throughout.

Shower Room go go boys, hot live DJs, dance areas, private rooms, food and drinks, steam room and sauna twerking and twirling boys and complimentary towels and lockers will all serve to create an environment of unbridled and unrivalled sexual acrobatics amongst the smoke and mirrors.

In an early incident we must report the talented clown about town DJ Dirty Nelly fell off the tightrope while rehearsing his balancing act for SEXCIRCUS – luckily into the safety net held by talented musical acrobat Mason Andrews who will be there to entertain you at the same level.

Also, the question on everyone’s lips is, will our very own Conchita Wurst, the amazing bearded lady Dusty Rosebud (aka the sexy Dale) who wowed the crowds at Boot Camp and Combat make an appearance in the sideshow of wonders at SEXCIRCUS?!

Anything goes at the SEXCIRCUS as there are NO rules and NO restrictions in this space where your imagination and you can run wild amongst all the well endowed baton twirlers and ring masters!

Dress code is your very best and sexiest underwear or swimwear or jockstrap or circus wrestling suit or butt-less briefs or maybe even your favorite pair of sport shorts. Of course you could be minimalist and just have a towel in the vicinity as nudity is absolutely fine at this men-only event. It is completely up to you!

BANG Clothing is one of our long list of high profile sponsors and has the largest range of suitable attire for this event. They are also offering 20% off any purchase at BANG when buying your SEXCIRCUS tickets in store.

There is no need to jump through hoops, rings, swings, slings and roundabouts as a limited number of tickets are on sale now online and in store.

The announcement that the SEXCIRCUS is coming to town generated so much excitement that first release tickets sold out within 48 hours. Remaining tickets are from only $40+BF!

As this event is expected to sell out, grab your SEXCIRCUS ticket now from either BANG Clothing or online at events.ticketbooth.com.au/event/SexCircus

See you at the SEXCIRCUS On Sun 8 June.